From Wiki
Jump to: navigation, search
Duckweed, from the plant family Lemnaceae, is an extremely tiny plant that is a pale shade of green. It floats freely on tranquil waters and bears seeds. Duckweed bears one to three leaves, which are one-sixteenth to one-eighth inch long. An individual root sticks out from every leaf. Giant duckweed is not what the name implies, it too is rather small. Just like common duckweed, it is a pale shade of green. Giant duckweed bears one to four leaves and is one-sixteenth to one-quarter inch long. 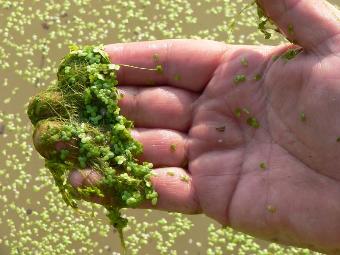 Duckweed has a tendency to cultivate and thrive in thick masses in still waters untroubled by moving currents, similar to watermeal. Usually more than one type of duckweed will be lumped together with these masses and can be a domineering intruder and are generally intermixed with other types of duckweed, Carolina pond fern, and watermeal. If masses blanket the top of the pond water, oxygen levels will be depleted and fish will cease to live. If these plants are not managed, the whole surface of the pond will be coated.

Thick masses of duckweed give shelter for micro-invertebrates or zooplankton, but if duckweed coats the entire surface of a pond for a long period of time, oxygen levels will be reduced. Additionally, these masses will phase out underwater plants by not allowing the sunlight to poke through. Ducks will eat duckweed and take it to other bodies of water by way of their feathers and feet, and by their waste.

Duckweed can be controlled physically, through nature, and chemically. Duckweed can be taken away manually by using a rake or net. This method will usually leave some duckweed behind.

Duckweed can also be controlled naturally by stocking a pond with young grass carp. Lastly, duckweed can be managed by way of a chemical treatment product containing fluridone and diquat.