From Wiki
Revision as of 14:24, 7 April 2010 by Woobles (Talk | contribs)
(diff) ← Older revision | Latest revision (diff) | Newer revision → (diff)
Jump to: navigation, search
You probably would never think it but one of the world’s most common insects is ants. They’ve been around for eons inhabiting every continent except Antarctica. They are small and their size can be anywhere from two to twenty five millimeters. They are different colors too. Ants can be brown, black, and even a reddish color. They come in all shapes and sizes. They are from the family referred to as Formicidae. Their heads are big and they possess inner and outer jaws. The inner jaws chew and the outer jaws carry things and dig.

The whole globe is covered with ants, particularly in warm areas. They can be found in your home to the rainforests. Their living arrangements are called colonies and they can house about one million of these tiny insects. There are many different kinds of ants. The more common ones would be driver ants, army ants, fire ants, honeypot ants, and leafcutter ants.

There are two kinds of ants that don’t have permanent colonies. One is the army ant commonly found in South America and the other is the driver ants located in Africa. There is a type of ant that lives in desert like places like Africa, North America, and Australia. There are the honeypot ants and they are recognized by their oversized abdomens. Weaver ants are interesting. They weave tree leaves together by using worker ants to pull the leaves together. Then the workers seal the leaves with a silk substance that acts like a glue to keep the nest together.

One ant carries a poison. We’ve all heard of them; they are the fire ant. The poison is piperidine alkaloids. They are said to have been introduced to the United States in 1929, when a ship from South America docked in Alabama.

Bulldog ants are unique in that they have only one chromosome. They are one of the largest and most original of the ant colonies. They can grow to 40 mm in length with the smallest species 15 mm long. The 90 species are all thought to be endemic to the continent of Australia. They are also known in Australia to be very aggressive in nature and their bight can be dangerous and even life threatening to humans. 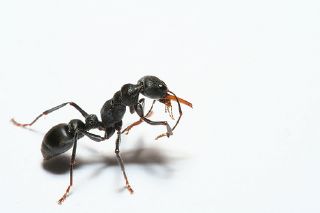 All of these small insects should not be taken lightly. They can cause problems for animals as well as people. The internet is a great source to learn more about these ant colonies and how they work.