Types of Lakes and Ponds

From Wiki
Jump to: navigation, search
This article will give the reader some general advice on the creation of lakes and ponds as well as the type of fish and aquatic marine life found in most lakes and ponds.

A pond is usually a man made body of water typically the size of a small lake. However the difference between a pond and an artificial lake is mostly a size related issue. They are both formed by a pooling of water from an external source such as a well, stream or other source. Ponds can be made by digging out a hole and lining a feed source for which water can more or less fill up the excavated area or a dam structure can be fabricated to “back-up” a water pool, yielding the same or similar results. These similar methods can also be utilized to form much larger scale projects such as reservoirs and lakes in effect. Ponds come in all shapes and sizes and most ponds range anywhere form 4 to 12 feet deep. Plant life is usually abundant and nutrient rich waters provide an excellent arena for algae proliferation as well as reptile and mammalian species. Ponds can range from just a few feet to well over 100 feet in diameter and are often foliaged with lily pads, duckweed and other various ferns. Ponds are abundant in insect life with many different species of birds enjoying the ecosystem standing somewhere near the top of the ponds food chain. Lakes, on the other hand are normally the result of tectonic activity where the earth shifts allowing for underground streams to permeate the surface, forming a lake. The Great Lakes of America are a result of seismic activity and are of one of the largest examples of what mother earth can accomplish if given time. Like ponds, lakes offer an abundant variety of life ranging from microbes to mammals found throughout the food chain and offer a sanctuary for most all species with minimal to exuberant water demands. Lakes are used as hatcheries as well and provide a resourceful supply of aquatic based foods for a large portion of the world. 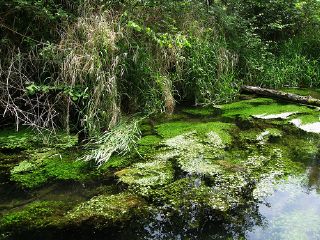 Fish in general have a range of physiological tolerances that are dependent upon which species they belong to. They have different lethal temperatures, dissolved oxygen requirements, and spawning needs that are based on their activity levels and behaviors. See your local hatcheries for suggestions on stocking and requirements.

There are three basic types of lakes - Eutrophic lakes, which are primarily nutrient rich water bodies with large inhabitant life such as birds, reptiles, microbes, mammals and plankton. These lakes normally have a depth ranging from roughly 1 foot to several feet and nuisance plant infestation varies greatly depending on the surrounding and inherent conditions. Oligotrophic lakes are limited in nutrients and are generally more asthetically pleasing to the eye due to the lack of foliage and undergrowth while dystrophic water bodies, also low in nutrient qualities, display a murky brownish tone due to free floating soil and clay particles found in abundance Lakes are generally segregated into categories including the shoreline known as the litoral, the bottom sludge layer known as the profundal and the water base known as the pelagial. Surrounding most lake and pond shorelines lives aquatic plantlife from scare to abundant quantities ranging from microscopic algae to larger ferns, all of various species with diverse requirements. Common lake fish include silvers, trout, carp, catfish and bass which find the habitat a perfect setting for sustenance and reproduction. Floating wood, grasses, leaves and insect pools are often found on the shoreline along with minerals, rocks and soils. The sludge layer of a lake or pond is normally a compost of decaying matter such as insects, feces, plants, leaves, fish, foul and mammals. The sludge layer, when overburdening the waterway, is often a main fuel for algae and nuisance plant life and in ornamental water ways requires a treatment of bacterial digestants to degrade and breakdown the ever accumulating slime and sludge.

Whether for recreation or habitation, lakes and ponds offer an immensely diverse ecosystem with broad and substantial character differences all attracting and sustaining various life from single cell anemia to people of all countries.